Whenever I’m asked for evidence as to the success of mixed land-use and community-based conservation strategies, I immediately think of a night a couple of years ago, camped out on a dry riverbed in Sera and Melako, in Kenya’s North Eastern Province. With just a mosquito net for cover, I was woken as a herd of elephant –mostly bulls –emerged out of the dark, and passed through our makeshift camp, their tusks catching the moonlight. Close enough to hear them breathe, to hear the sound of their feet in the sand, I was transfixed. Another minute and they were gone.

There is little compare to encountering elephant. To do so at night, in the community-owned conservancies of Sera and Melako, was a dream come true. Had I been there 20 years ago, it’s unlikely anything would have happened. I would have gone to sleep and woken up and breakfasted and moved on. Human-animal conflict, the pressures of livestock grazing, and poaching had all served to reduce wildlife numbers – in the area and in surrounding areas.

That’s all changed – not completely, but certainly comprehensively – and we owe that change to the Northern Rangelands Trust (NRT), an umbrella organisation that has successfully adapted practices first trialled by the Craig family on what is today the Lewa Conservancy. It was at Lewa that northern Kenya wildlife tourism operating in conjunction with livestock production was shown to work. Adopted first by neighbouring Il Ngwesi and then by Namunyak, the idea of the community conservancy grew. Sera joined in 2001, Melako in 2004.

Initially organised by Lewa, the rate of take-up among local communities warranted the establishing of a separate banner organisation, one dedicated to providing guidance and training, and to operate as a fundraiser. The NRT was formed in 2004. Today, it represents 39 member conservancies across 42,000 km sq, covering northern and coastal Kenya, and consists of 320,000 people and 18 different ethnic groups. It’s an extraordinary organisation, a conservation trailblazer of the highest order.

My own contact with northern Kenya precedes the NRT. I partly grew up in Kenya, and I remember family breaks in the north. Later, setting out on my own, I would briefly manage Borana Lodge. Barona is Lewa’s neighbour, and together with the experience of setting up Bishingari Lodge in 1994, it played a big part in the decision to set up Journeys by Design. Since then, I’ve worked in one way or another with Lewa, Borana, and latterly the NRT for much of my working life.

All of which explains why I was keen that northern Kenya be one the at-risk ecosystems supported by Wild Philanthropy, and that the NRT be one of our on-the-ground partners. It’s early days, but I’m delighted to report that we’ve enabled the donation of US$ 8,000 to Sera, provided ongoing financial support for six rangers, and through our impact travel programme introduced potential future donors to the NRT and its work.

It’s a small contribution to a massively exciting vision. As well as mitigating inter-ethnic strife and human-animal conflict, providing secondary (livestock management remains the predominant economy) streams of income, creating jobs, and reducing levels of poaching, the growth of the community conservancy has seen a knitting together of a rangeland that stretches from Lewa to Lake Turkana in north-west and just shy of the Ethiopian border in the north.

For Wild Philanthropy, the dream would be to push on north-east of Turkana, into the Omo, and further north, linking protected areas, and so form a contiguous transborder network of conservancies stretching from Ethiopia’s wildlife belt to Kenya’s Laikipia. It’s a dream, but it would mean the reclaiming of historic rangelands that might – just might – see me waking in a camp in the Omo, surrounded by elephant. 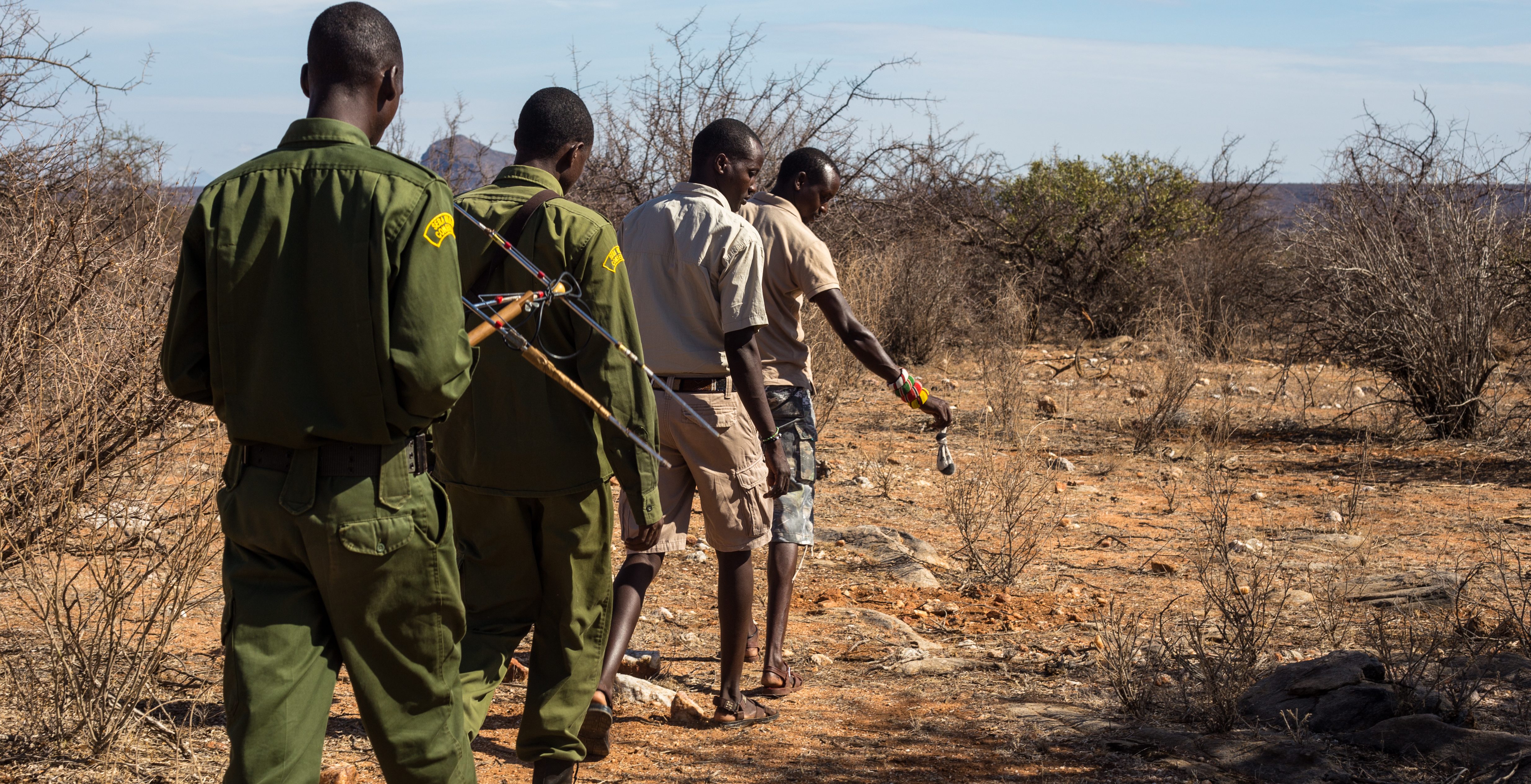 Images by Simon Morris shows an aerial shot of the Northern Rangelands and NRT-trained rangers tracking rhino at Sera.