One of the African Tourism Crisis Fund’s first grants was to Enonkishu Conservancy, a Wild Philanthropy core ecosystem project, and which as well suffering the knock-on effects of COVID-19 has been hit hard by floods. This grant – as well as a private subsequent donation – has gone directly towards supporting conservancy jobs. The below was kindly provided by Rebekah Karimi, Enonkishu’s general manager, and is excellent not only for the on-the-ground insight it gives into how the crisis is affecting the conservancy, but also for providing us with two wonderful snapshots of the lives of head ranger Francis Dapash and head herder Benard Lashinka – particularly in terms of how they, their loved ones, and the vital work they do will benefit from the Fund’s support.

Pestilence, flood and our thanks

Covid-19 has severely impacted our conservancy’s operations as we are largely reliant on income from ecotourism. It is very early into Kenya’s battle with the virus itself, but the panic has set in. The lack of tourists has not only impacted revenue, but the lack of tourist activities in the conservancy means less observers which makes the conservancy more vulnerable to people harvesting its natural resources. We have already noticed increases in people entering the conservancy to harvest wood and even hunt bushmeat, which makes the rangers and herders even more essential in this unprecedented crisis.

In our part of Kenya, the past six months have already brought unseasonable rainfall resulting in lost revenue from farming. Now with the pandemic, employees relying on tourists are left jobless and often have no alternative than to enter the conservancy to sustain themselves. Enonkishu is striving to assist surrounding communities with their version of the crisis and any contribution towards Enonkishu’s operating budget will free up time and resources for community programs.

The silver lining is that the wildlife has been largely unaffected, and even while facing the potential loss of half of their wages, Enonkishu employees have loyally chosen to stay and work through it rather than going home to their families. Within the conservancy, all employees have been provided with face masks and several “Tippy-Tap” hand-washing stations have been deployed to assist in the fight against Corona. The hope is that this goodwill can extend to the community as they are educated about the dangers of this disease and hopefully this crisis can bring everyone together in a way that hasn’t happened before.

Enonkishu is incredibly grateful for Wild Philanthropy’s initiative in setting up this program [the African Tourism Crisis Fund] and would like to extend that gratitude to all the supporters that are willing and able to sustain us during this difficult time. Kenya and the Maasai Mara is ready and waiting for you at the other side of this tunnel!

The head ranger for Enonkishu conservancy is Francis Dapash. He has worked for Enonkishu conservancy for 10 years, before it was actually designated as a conservancy. Dapash joined Enonkishu immediately after finishing secondary school. He comes from Laila, an area that was initially going to be included as the conservancy, but in the time it took to raise funds to provide conservation benefits to landowners, much of the land in his area was cleared for smallholder farming and no longer available for conservation. 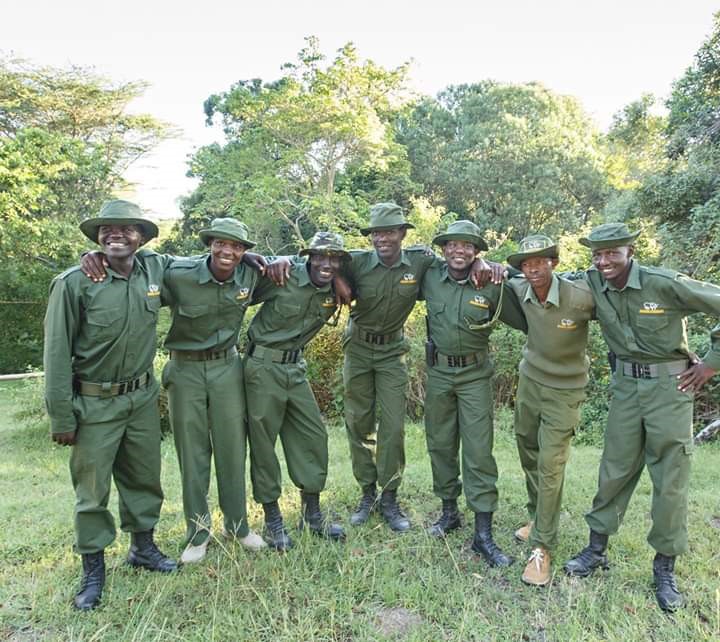 Francis Dapash (centre) and his team.

Dapash is the oldest of six, two brothers who are attending university and four sisters, three (triplets!) in secondary school, and one in primary. He pays for his youngest sister to go to school using investments in livestock. He has attended several ranger training courses in order to achieve the rank of Sergeant, is incredibly committed to his work and over the years has trained incoming rangers to their current role within Enonkishu.

In 2016, Dapash married Emily, who comes from a neighboring community. They have two children, Shadrack and Damaris. Shadrack is four years old and loves to spend time at his grandmother’s house. When Dapash comes home on the weekends, he gets a report from Shadrack if any people have been chasing wildlife out of the fields. Shadrack knows his father’s job is important, but when he is home, he will not leave his father’s side. Damaris is Dapash’s two year old daughter. She equally delights in her father’s company, and her favorite thing is to ride on the motorbike with him – that may sound dangerous, but here in Kenya, it is the norm! His son has begun school and normally two thirds of Dapash’s wages are sent to his wife to provide food, clothes and school fees for the children and maintain a herder to look after his sheep and cows.

Although Dapash was fortunate enough to finish secondary school, his options for employment are limited, as he has spent his entire adult life investing his time and effort into Enonkishu Conservancy.

Benard Leshinka joined the Enonkishu herding team in 2016 when the conservancy began a bull fattening herd. He comes from Narosura near Narok, and came across the conservancy during his search for work.

Leshinka was fortunate enough to attend secondary school, which is rare for a herder, but his Maasai culture called him to look after livestock and his brains are essential at keeping tight records of the herds. He has a photographic memory and recognises cows just as others recognise individual people. His talent is astounding and his loyalty has vastly contributed to the success of our growing Herds for Growth program. 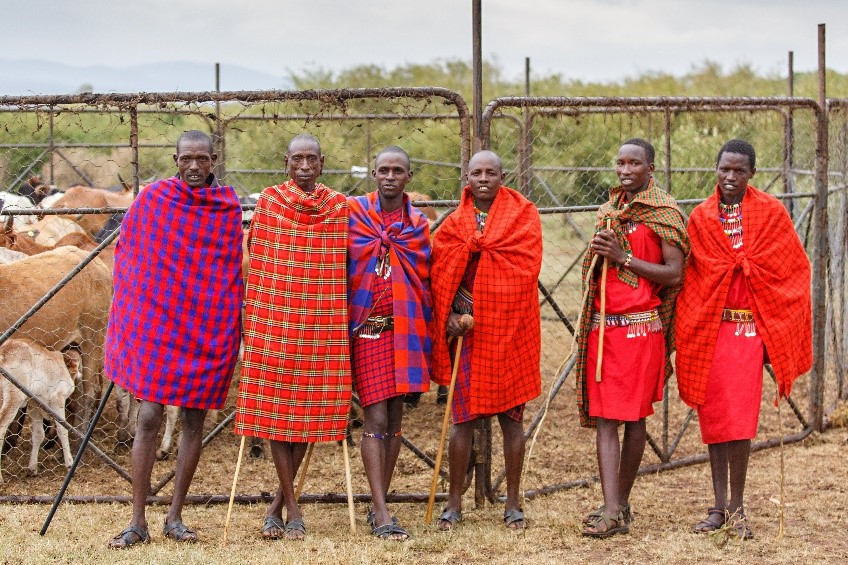 The oldest of six children, Leshinka’s youngest brothers attend secondary school, and are supported by his income. He met his wife, Naitauang, in 2012, near his home. Natauang and Leshinka have two daughters, five-year-old Naipasoi and two-year-old Sainapei. As well as supporting his own children, two other children stay with Leshinka’s family: his sister’s son Lepapa and his wife’s sister’s daughter Sianoi. Three quarters of his wages are sent to Naitauang to purchase food, clothes, pay a herder to care for his livestock, and pay school fees for five students!

Leshinka’s five-year-old daughter, Naipasoi, is especially interested in livestock and wildlife, as her father has explained what the objective is in Enonkishu, promoting the coexistence of the two. When Leshinka goes home, he is bombarded with stories about school and requests for stories about incidences where Leshinka has encountered predators with the herd of cattle.

As Leshinka is the oldest of his siblings, his responsibilities are great within the family. If there are any illnesses or accidents involving his parents, siblings, nieces, or nephews, Leshinka and his income assist the family through it all. His salary and position at Enonkishu positively impacts a huge number of people.

A big thank you to Rebekah, Francis and Benard for the invaluable insight into Enonkishu and how it is managing during exceptionally trying times. If you would like to learn more about either the African Tourism Crisis Fund or Enonkishu, please do get in touch. If you would like to donate in support of ecotourist jobs in Africa, please see here. 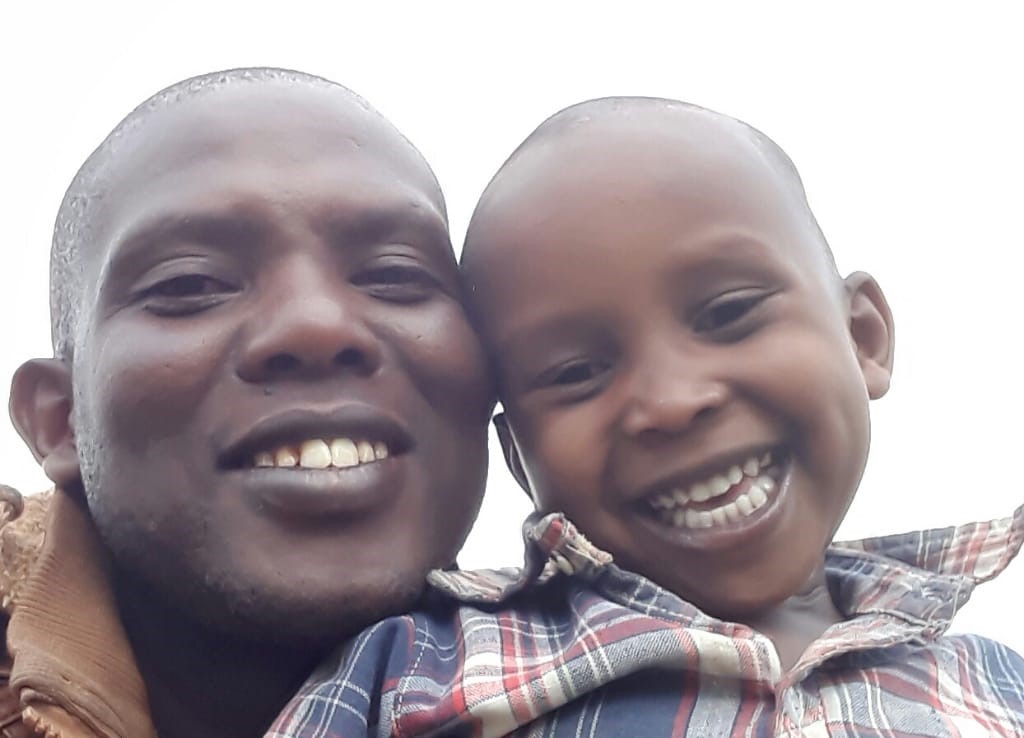