Having just got back from Kenya last week and being lucky enough to visit Ol Pejeta and met Sudan the last male northern white rhino, the news yesterday that he had died at the age of 45 hit particularly hard. He leaves behind him the last two northern white rhinos on the planet, Najin and her daughter Fatu. Extinction seems a near reality.

The significance of Sudan’s death

Ol Pejeta Conservancy has been home for Sudan, Najin and Fatu since 2009 when they were relocated Dvůr Králové Zoo in the Czech Republic along with Suni, another male who sadly died due to natural causes in 2014. Since then these rhinos have been under 24-hour armed surveillance, a sad indication of how much a threat illegal poaching continues to be.

Richard Vigne, Ol Pejeta’s CEO said, “We on Ol Pejeta are all saddened by Sudan’s death. He was an amazing rhino, a great ambassador for his species and will be remembered for the work he did to raise awareness globally of the plight facing not only rhinos, but also the many thousands of other species facing extinction as a result of unsustainable human activity. One day, his demise will hopefully be seen as a key moment for conservationists worldwide.”

Richard has been leading the work at Ol Pejeta, which I was lucky enough to see first-hand whilst I was there. The conservancy is held up as a role model for conservation and it is easy to see why. The populations of wildlife are booming, local communities are benefiting, tourism is rising and, importantly, the team have focused on developing sustainable commercially generated revenue through tourism and agriculture in order to run the conservancy into the future.

By way of background, in 2004, the cattle ranch was purchased by my previous employer, Fauna & Flora International (FFI), with the financial backing of the Arcus Foundation, a private international philanthropic organisation founded by Jon Stryker. The land purchase was wholly funded by a $15 million donation from the Arcus Foundation, which worked in tandem with FFI and the Lewa Wildlife Conservancy to secure the 90,000 acres of open Savannah grassland and convert it to a national land trust and establishing Ol Pejeta Conservancy. Ol Pejeta aimed to become an innovative and sustainable model that conserves biodiversity (particularly endangered species) and contributes to economic growth and the improvement of the livelihoods of rural communities. It seems to be delivering.

Anti-poaching and meeting Diego of the Dog Unit

When at Ol Pejeta last week, I was lucky enough to catch up with Samuel Mutisya, Head of Conservation. He is a fount of knowledge and kindly took an hour out of his busy day to talk me through how things are going at Ol Pej. Wildlife populations are on the up. There are 114 black rhinos, with a target of 130 by 2020. Anti-poaching units are not only effectively stopping poaching but also responding to human-animal conflict and other criminal activities in the area. I was impressed to hear that the conservancy is able to cover almost all of its basic annual operating costs ($6.5m) through sustainable commercially generated revenue, primarily tourism and agriculture. This is huge, and another demonstration of the value well managed tourism can play in conservation. I was also pleased to hear the emphasis Samuel put on the role of local communities. In 2016, over $650,000 was spent on various development projects. Key to the success of Ol Pejeta has been the demonstration to local communities that they can benefit from the conservancy. The conservancy also employs nearly 1000 people.

Samuel also took me to the Dog Unit. I’m slightly obsessed with dogs, and have two unruly labradors of my own, so this was a real treat! I’d been super impressed by the Good Boy Diego campaign, which was run a few years ago, so I was delighted to finally meet the famous Diego in the flesh! The control centre is manned 24/7. While I was there it was quiet and Paul, the leader of the unit, explained this was because the nights are the busy time for poaching, so the team were getting some rest. The unit is armed and operates under the Kenyan Police Service. The dogs are trained daily and I was able to join in some training by hiding in the bushes while a dog was given my scent and sent out to find me. It didn’t take him long!

Enonkishu and your support

Ol Pejeta is clearly a success story. However, the loss of Sudan, and effectively the northern white rhino, is a stark reminder that we must be investing more in protecting, conserving and enhancing our natural world so future generations can also enjoy seeing such amazing animals in the wild. Wild Philanthropy sees the huge opportunities of establishing sustainable revenue streams for conservation and is actively working to demonstrate how tourism can be one of these revenue streams. We’ve learned a lot from models such as Ol Pejeta. One project that we support that is also learning from the lessons from Ol Pejeta is Enonkishu Conservancy.

Enonkishu Conservancy in the northern Mara is developing a similar financing model that will support the 6000 acre conservancy through three different enterprises:

Wild Philanthropy is supporting Enonkishu and are running a joint fundraising event in Goodwood House on 28th June with support from the Duke of Richmond. We’ll be auctioning a Journeys by Design safari amongst other exciting items so please get in touch if you like to join the event. Tickets are £200.

Getting back to the news of Sudan and what this means for the future, FFI’s CEO Mark Rose sums things up well: “We must learn our lesson from this tragedy and take urgent action to ensure that never again do we allow numbers to fall so perilously low. We can save the rhino, but it’s a long hard road ahead.” Wild Philanthropy is certainly willing to take the long hard road ahead. We would love your support. Donations can be made through our donations page. We are also happy to pass donations on directly to other organisations: just mention this in your donation notes or get in touch with us and we can introduce you directly. 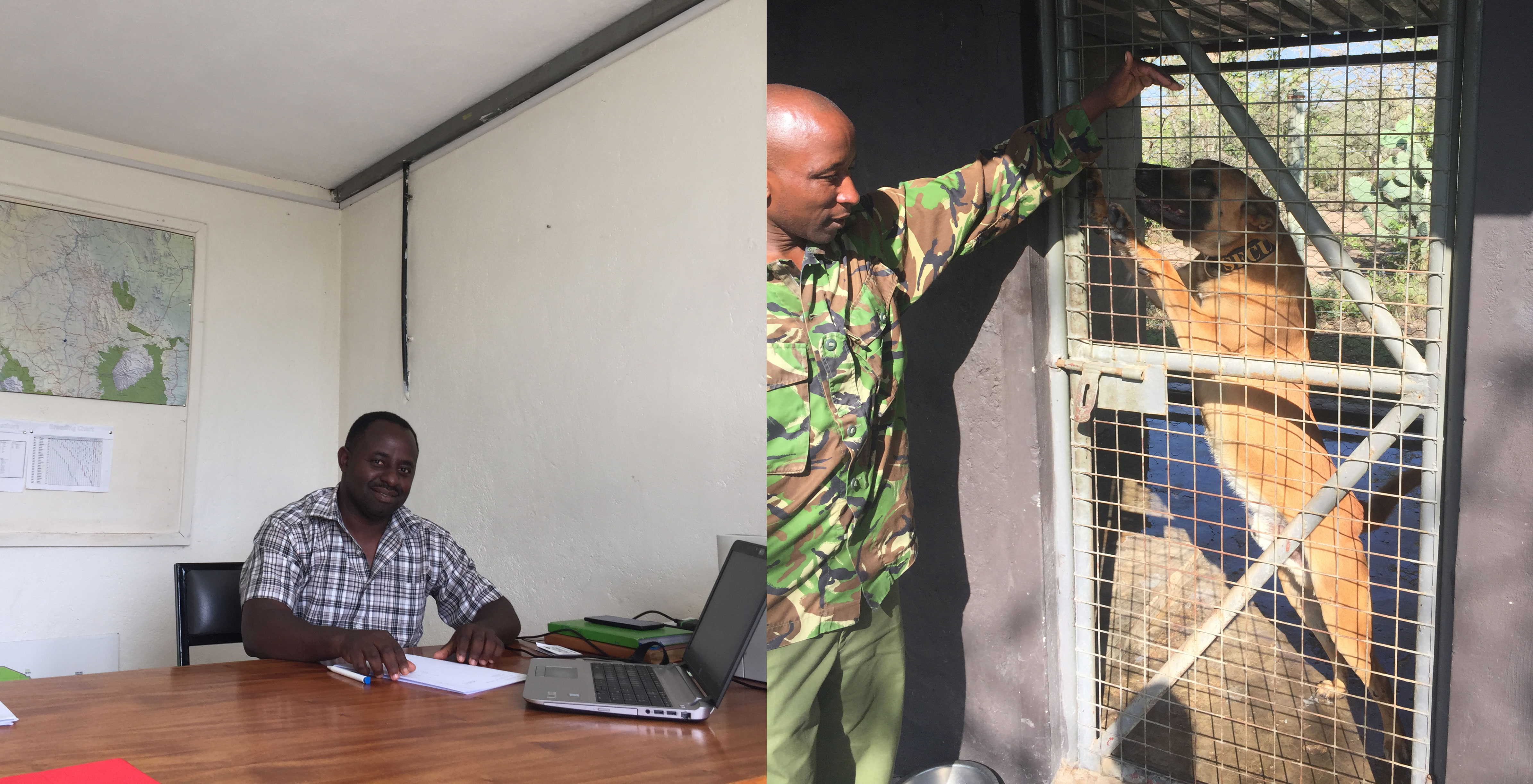 Title image credit: Original art by Sally Kirby based on a photo of Sudan by Ami Vitale

Below images: Samual working at his desk and Diego of the Dog Unit