A champion of the industry, Greta Iori was interviewed as part of our celebration of International Women’s Day.

A cold Wednesday afternoon last week I got the train to London to meet up with Greta Iori. The Beast from the East was upon us, the snow blowing sideways, wreaking untold havoc on our somewhat vulnerable transport system, and I was lucky to catch the only train not cancelled from Brighton to Victoria. Iori and I met in a West Ken cafe.

I was here to find out about a life that is as extraordinary as it sounds. You’d never guess from her welcoming and unassuming demeanour that Greta Iori’s job title is Wildlife Crime Consultant. The ease with which she explained even some of the most complex conservation issues from a socio-political perspective – humouring in the process this fool, your humble blogger – was as impressive as it was kind.

‘I grew up in Ethiopia. My mother is Ethiopian and my father Italian. They were in love with nature and so, growing up, I had this underlying deep respect for the outdoors and the natural world. We used to travel all around the country pitching tents in Awash all the way through to Lake Langano and the Omo Valley. I have very fond memories of these times.

‘When my brother, Fabio and I were young, our Mum and Dad used to take us to Awash Falls to go rafting down the river, even with all the crocs; my Dad’s an adrenaline junky at heart. Another time, we went camping in Mago National Park and set up camp in this remote spot by the river. It was early in the morning, my brother and I were running around exploring, while my parents were still asleep.

‘I heard a noise behind me and turned around to see that my brother had a baboon sitting on his head. It had climbed down a tree and just sat there. The first thing I could think to do was grab a big stick to chase it off, but it ended up chasing me! Fortunately, we weren’t too far from where my parents were sleeping so managed to escape. Even though it was terrifying, it was nice that it felt safe enough to sit on my brother’s head – it probably thought he was another baboon.’

Numerous studies suggest not only that access to the natural world have healing properties for mental and physical health, but it is an integral part of child development. Indeed, many of the most interesting stories I’ve heard involve a large helping of nature early on in life. This notion seems to permeate Iori’s adulthood; this was indeed an interesting story.

‘One of my favourite adventures with my family was down in the Omo Valley. We went camping on the river bank long before any travel operators had discovered it. I was young, but I remember wondering if it would ever be this remote and pristine again if I came back. Even so, I remember my Dad reminiscing about how it used to be last time he was there years before. I think the same thing would happen if I went back now.

‘But that’s the nature of it. We can’t just preserve everything, we have to move with the times. Human population growth is out of control, the population of Ethiopia is around 100 million now, and one of the main parts of my job is not to simply stop humans from killing wildlife, but to figure out how humans and wildlife can co-exist; how each can benefit from the other. Conservation can’t happen without looking at the broader picture of how humans and wildlife interact when they inevitably come into contact.’

Iori’s story took her to the Simien Mountains, home to the Ethiopian wolf, terraced hillsides, Gelada baboons and Ethiopia’s highest peak, Ras Dashen, where she had previously spent some formative times as a child. After working in the Simien Mountains in Northern Ethiopia for some time – and falling in love with the elusive Ethiopian wolf, the rarest canid on the planet, of which there are 500 left in the wild – Greta came to Kings College, London to study Tourism, Environment and Development. Her thesis: An analysis of the political ecology of enforced conservation and wildlife crime.

‘If I was writing a thesis on something, I wanted it to be something a little more substantial – something that would make an impact and didn’t back away from controversy. I went to study the area of Balule Nature Reserve, bordering on Kruger, where the Black Mambas operate.

I wondered out loud what the Black Mambas were, aside from a fearsome entity everyone’s taught to avoid on their first excursion in the bush.

‘They’re a group of women employed in the local community as an unarmed anti-poaching unit. The Black mambas shed light on the incredibly complex but vital aspects of community dynamics we must think of when developing conservation and anti-poaching strategies. Whereby, when poachers are men from the same village or community circles as the Mambas, it would not only make the Mambas effective intelligence gathering individuals, as they would be aware of information of potential intrusions, but on a deeper level, they would often naturally deter poaching in the reserve, as the poachers did not want to interfere with the sources of income of their communities’ women, sometimes mothers, sisters, wives et cetera.

‘Of course, this is a small case in a private reserve, and often leads to simply pushing poacher activity slightly further into other reserves; but if it is replicated across protected areas and in all communities, with the help of education and alternative livelihood creation, it could indeed significantly increase our chances of saving the wild, especially as value of the species they protect is taught from mother to child, fostering our future’s conservation champions for generations to come.’

Iori went on to tell me about the benefits of being unarmed, which apparently instead of fighting fire with fire, gives them a strange aura of something akin to diplomatic immunity in the poaching arena. ‘I knew these ladies when they were just starting out; they’re so successful now and they’re like celebrities.’

One of the most interesting findings from Iori’s dissertation was that because defence against poaching is so expensive, it can be a lucrative business for private companies, which can lead to corruption since they’re only paid to operate where there’s evidence of poaching.

‘I found cases and was told of accounts of how easily their privatised anti-poaching units could be compromised, in order to remain relevant. The world of wildlife crime isn’t black and white; there are so many different layers to it, from the locals right up to the suppliers and buyers at the top of the chain.’

Iori spoke to me about many other things that will have to wait for another day – there were far too many interesting anecdotes, facts and gems of wisdom from the bush to list here now. However, before finishing, I was keen that she should share what International Women’s Day means to her.

‘First of all, I want to make it clear that this is not just for me. My dream is to inspire young girls who want to do things normally outside the status quo of what they’re usually expected to. You’d be surprised how many negative responses I get when I tell people I’m a wildlife crime consultant; I’m a young lady, and young ladies aren’t meant to get their hands dirty, but little does the world know of the power of a woman when she is given the opportunity to cultivate the land!

‘I think that lots of girls and women, particularly those that have it ingrained that they should steer clear from particular occupations because of their gender, need to be encouraged that if they really, really want to do something then they should do it. And, as we’ve seen with the Black Mambas: in some cases women bring a different stance to a job that makes them more successful.’

Over the next few weeks Greta will be in Ethiopia working on the Ethiopian National Elephant Action Plan and developing a nation-wide Community engagement strategy for wildlife conservation with the hope of ending wildlife crime. Which just leaves me to say a massive thank you and best of luck to Greta Iori. I very much enjoyed meeting her and learnt an enormous amount. For more information on International Women’s Day and what you can do to make a difference to gender disparity globally, please see Journeys by Design, our sister company’s recent blog, Message Your Sister, or get in touch with one of the many women who run the world at Wild Philanthropy and Journeys by Design. 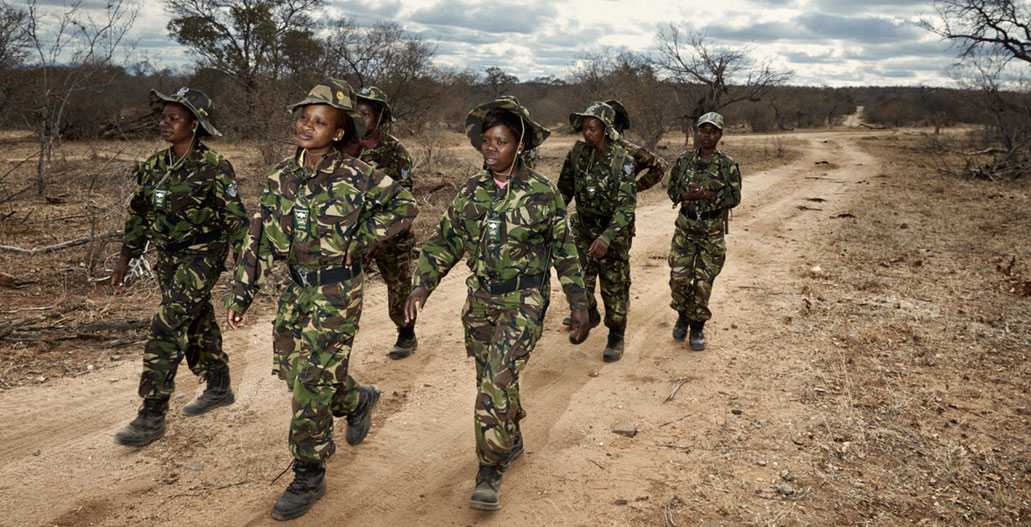