The northern white rhinoceros is a subspecies of the white rhino. Whilst members of the same species, i.e. northern white rhinos and southern white rhinos could technically breed to produce fertile offspring (the very definition of a species), the three remaining northern white rhinos (two females and one male) either have reproductive problems or are too old to reproduce. Once roaming parts of Uganda, former Sudan and DRC, they have since been poached to the brink and are, as Save The Rhino put it in a recent article, ‘functionally extinct.’ Added to this, the western black rhinoceros was declared extinct in 2011.

In today’s social media culture, an unspoken competition to get the most re-tweets or likes, often those that succeed are the most heart-rending. Good news is rarely as successful. But the truth is it’s not all doom and gloom. The southern white rhino is a classic example of a success story: at the beginning of the 1900s, they numbered as low as 50. Today, ecologists estimate their numbers at around 21,000.

Meanwhile, the black rhino is often used as a keystone species by conservation charities as an example of an animal in plight. Granted that between 1970 and the mid 90s the population dropped from about 70,000 to 2,410. However due to diligent conservation models put in place to protect and restore this species, their population is about 5,500 individuals today. Perhaps more pertinently, their distributional ranges have also increased. We have got to place where the number of births of black and white rhino exceed the number of deaths.

Last month Will and I were invited to Sera conservancy to go black rhino tracking with the rangers. Found in the Northern Frontier District of Kenya, Sera is a community managed conservancy, and very much at the forefront of the aforementioned model for the conservation of the black rhino. We were lucky enough to come on a day where the elected board for the Northern Rangelands Trust were getting together for their monthly update meeting.

The conservancy was originally formed by the Samburu, a tribe of semi-nomadic pastoralists, with a history of conflict with neighbouring tribes, the Rendille and Borana. It was decided by these tribes that working together gave a much better chance of sustainable rangelands. Since these collaborations began, the wildlife in the area has increased dramatically. Sightings of Grevy’s zebras, which are the most endangered species, increased between 2006 from 250 to over 2,000 and those of elephants from 3,000 to 11,000.

In 2015, the Northern Rangelands Trust partnered up with the Kenya Wildlife service to translocate 10 black rhino from Nairobi and Nkuru National Parks into Sera, which is a testament to the government’s confidence in not only the community that runs Sera, but the community-run conservancy structure as a whole, which is a way that both wildlife and community can benefit from the same work.

Because the cost of rhino horn is roughly US$ 70,000/kg, the anti-poaching team, six of whose funding and uniforms were paid for by Wild Philanthropy, need to work diligently morning and night through the scorching heat of Sera, which reach temperatures upwards of 40 Celsius (104 Fahrenheit), to keep them safe. One main task is checking in with each and every one of the rhinos twice a day. Saruni have recently opened Saruni Rhino Camp, which give guests the opportunity to follow the trackers – no mean feat when black rhinos hearing is acute and dry earth and desiccated vegetation under foot make it near impossible to move silently without scaring them off.

So, to summarise, there is much good being done. While devastating pictures of dead, mutilated rhinos go viral, it’s difficult to remember that conservationists are coming up with increasingly innovative methods for protecting them. And very often the heroes are from communities that until recently were involved with poaching themselves. The key to conservation is community and realigning the interests of people and wildlife, a belief fundamental to everything we do at Wild Philanthropy.

If you would like to learn more about Wild Philanthropy, our conservation journeys, and our work with the Northern Rangeland’s Trust, please do get in touch. 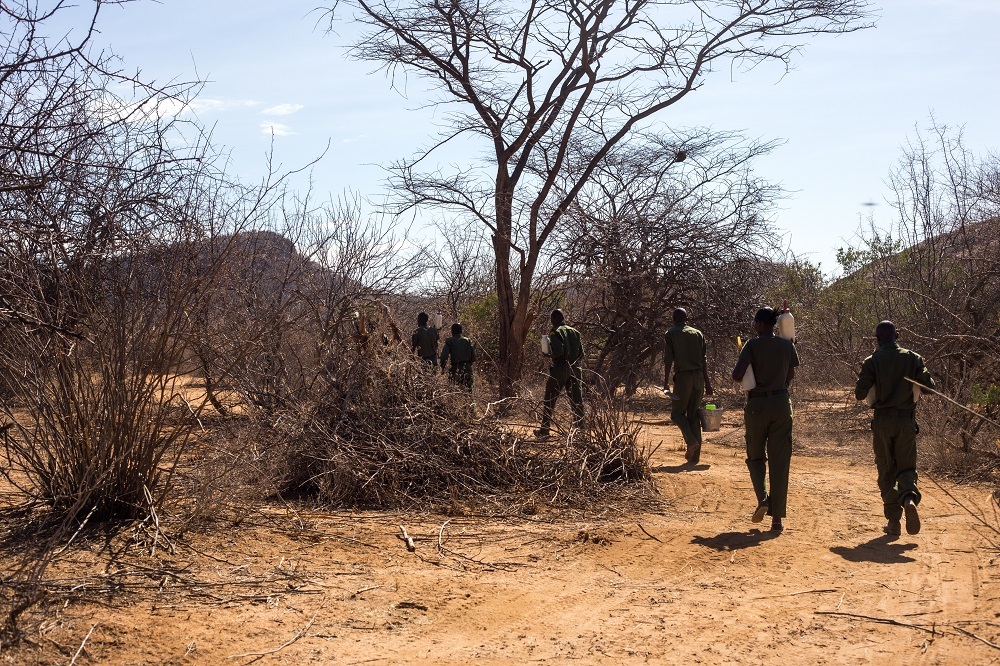