There has been much talk over the past few years around the various UN COPs and almost always it refers to the Climate Change Conference. But what are COPs and why do they matter?

What is a COP

COP stands for ‘Conference of the Parties’ and it’s the key mechanism the UN uses to try to create global alignment on key issues. Back in 1992, at the Rio Earth Summit, three key conventions were established: the Framework Convention on Climate Chance; the Convention on Biological Diversity; and Convention to Combat Desertification.

Why does it matter

All these conventions have COPs which bring the country parties together with an aim to make progress towards agreed goals. Rio+20 was held again in Rio, 20 years after the landmark Earth Summit and was another point where commitment to the green economy and sustainable development were made by global leaders.

Most talked about recently has been COP26 last year in Glasgow, which was a climate change COP. Paris and COP21 also got a lot of media attention, partly due to the successful adoption of the Paris Agreement, a legally binding international treaty on combating climate change. Although progress is slow, it is easy to see how difficult reaching consensus is when you are dealing with so many countries. Personally, I was fortunate enough to have attended the Rio+20 summit, and then again COP 21 in Paris, where I led the Fauna & Flora International’s delegation.

The importance of COP15

Less talked about are the COPs relating to the other conventions. One I would like to highlight here is COP15, which is focused on biodiversity – our natural world. COP15 is being held in Montreal in December 2022. It is what’s known as an extraordinary COP. The last one was in Japan in 2010 and the key aim of these extraordinary conferences is to agree on targets for the next ten years.

This is why this COP15 is so important. Arguably, it’s more important than the climate change COPs, which generally get so much more attention. Firstly, biodiversity underpins and regulates our climate. Without protecting it, we will not be able to combat climate change. Secondly, our natural world is under unprecedented threat. Wildlife populations are declining rapidly, with 60% of animal populations having been wiped out since 1970. 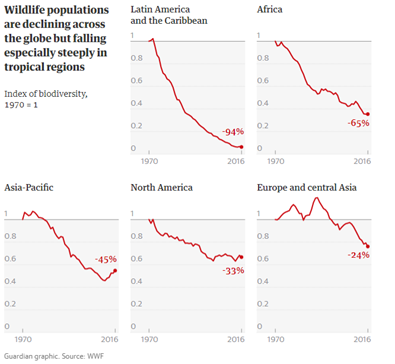 Biodiversity underpins everything we do. The air we breathe, the water we drink, the fibres we use, the food we eat, and the climate we live in. If we do not do something to stop our impact on the natural world, there will be no natural world left. And in order to combat the destruction of our natural world, we need to come to global agreements, and the only realistic mechanism for that is through the UN.

I joined an interesting webinar last week, run by Business for Nature, a global coalition that brings together business and conservation organizations and forward-thinking companies. Together, they demonstrate and amplify a credible business voice on nature, calling for governments to adopt policies to reverse nature loss in this decade. They are working hard to bring business to the table at COP15. Through their call to action, they work with some big names – Unilever, Bayer, BNP Paribas, and PepsiCo to name a few, but also smaller business, including our partner Journeys by Design.

They are now asking business to continue committing to mandatory assessment and disclosure on impact on nature, which is a target they want to be adopted at COP15. We very much welcome this. Without understanding one’s negative impacts, it is almost impossible to start addressing, reducing and mitigating them. Without transparency through disclosure, there is little chance we will see the level of change we need. Business has a huge role to play in not only climate change, but also in protecting our natural world and we hope that COP15 will bring business, government and civil society closer to a plan to save our planet before it’s too late.

If you would like to know more about Cop15 and how it relates to the work we do, please contact Paul Herbertson.