Following on from its consultation report, the Botswana government last week announced that it would be lifting its 2014 hunting ban. The news polarises conservationists: those opposed argue that it threatens to undo the country’s extraordinary conservation achievements; those in favour argue that the ban’s been a disaster and threatens to undermine those self-same achievements.

While the announcement’s short on details as to what comes next, the initial report’s recommendations called for a legal framework for Botswana’s safari hunting industry to be developed, that its elephant population be managed within its historic range, that wildlife migratory routes ‘not beneficial to the country’s conservation efforts’ be closed, that a policy of ‘regular but limited culling of elephants be introduced’, and that meat resulting from culled elephant be canned as pet food and other by products.

Why it’s a popular move in Botswana
The 2014 hunting ban came off the back of a survey by NGO Elephants Without Borders, which found an average 61% decline in 11 species since 1996. Reasons for the decline included hunting, poaching, human encroachment, habitat degradation, drought, and fires.

Botswana’s wildlife is concentrated in reserves and national parks and larger buffer zones. Previous to the ban, the buffer zones consisted of Wildlife Management Areas and Controlled Hunting Areas, overseen by the Community Based Natural Resources Management programme (CBRNM), set up in the early 1990s to help ensure local communities benefit directly – via conservation-based organisations (CBOs) – from the protection and management of natural resources.

After the ban, all hunting concessions were converted to non-consumptive tourism and other activities. While welcomed internationally, it was not in Botswana. The survey’s methodology was questioned. Many of the converted hunting concessions were seen as unsuited to photographic tourism. The government was criticised for relying too heavily on a so-called snapshot analysis, and for not taking the time to investigate long-term wildlife population trends before making its decision.

Since then, a number of reports show that the ban has had a detrimental effect on local community life in many disbanded Controlled Hunting Areas. A study by the Okavango Research Institute’s Joseph Mbaiwa (2018) finds that concession hunting generated two-thirds of community tourist revenue. A fall in income, a loss of jobs, and compromised diets, says Mbaiwa, has picked away at the conservation-orientated fabric of CBNRM villages, resulting in an increasingly negative view of wildlife and a commensurate rise in poaching. The government’s shoot-to-kill anti-poaching policy, its failure to make good on promises to annually review the ban, a perception that it has colluded with foreign business interests at the expense of local communities, and a reported rise in human-elephant conflicts all served to strengthen the view.

The incoming government’s self-publicised fresh approach has met with cross-party support in parliament, and widespread support among the electorate. As well as commission the report, popular moves include an advertised return to traditional consultative politics – with scientists, conservationists, local communities all canvassed – and the disarming of Botswana’s anti-poaching units of military weapons. The lifting of the ban was a shoo-in.

Hunting as the pragmatist’s answer
The socio-economic argument for trophy and commercial hunting is well-known. According to an impact study (2015) commissioned by Safari Club International, hunting-related tourism in eight African countries contributes US$426 million to GDP and supports 53,000 jobs. Advocates champion two hunting models: private wildlife areas and local community conservancies. Success stories for both include the white rhino in South Africa and the black rhino in Namibia, the two countries responsible for conserving 90% of the world’s rhino, of which 0.34% and 0.05% are hunted annually.

Hunting, the argument goes, is lighter, fitter, and much more profitable (for local communities) than photographic tourism, which incurs heavier operating costs and is dominated by non-local interests. Nearly 50% of the revenue generated by hunting in northern Botswana, says Mbaiwa, was ‘used in the local district, 25.7% at the national level, and only 24.8% was being paid overseas.’ Well-meaning bans, conclude pro-hunting organisations, devalue wildlife, remove incentives for its protection, and lead to increased levels of poor governance, poaching, human encroachment and, ultimately, habitat degradation.

The argument for sustainable hunting attracts heavyweight support. ‘Legal, well-regulated trophy hunting programmes,’ says the International Union for Conservation of Nature (IUCN), ‘can – and do – play an important role in delivering benefits for both wildlife conservation and for the livelihoods and wellbeing of indigenous and local communities living with wildlife.’

Hunting’s numbers in perspective
A recent critical analysis of the abovementioned Safari Club International report argues that hunting’s economic contribution to conservation is overplayed, to the tune of US$304 million. However, even if we were to take the report’s figures at face value, trophy hunting across the study area accounts for just 1.9% of a tourist industry worth US$17 billion.

How much of that is returned to conservation will vary according to country and area. On average, according to another IUCN (2009) study, hunting concessions occupy more than one sixth of the land in countries that allow it, 22% more than is occupied by national parks and other protected land. The average return per hectare on that land is US$1.1, which accounts for 0.06% of overall GDP, and of which the local community’s share is a pretty poor average of US$0.10 per hectare.

That return is further diminished in countries and areas suffering poor governance, corruption, lack of transparency, and inadequate resources. In Tanzania, for example, where hunting makes the biggest contribution, state ownership of land and leases on hunting concessions has overseen a massive decline in elephant and lion. Meanwhile, once poster child for local community-owned hunting conservancies, Zimbabwe’s CAMPFIRE is something of mixed bag, its failing hunting blocks the most obvious case study for hunting-as-conservation-strategy gone wrong – land grabbing, habitat degradation, and poaching are all symptoms of that failure.

Away from the vagaries of trophy hunting regulation, it’s clear that wildlife trophies are grossly undervalued. This is true across the continent, though Tanzania serves as fair example, it being the most expensive country in which to hunt. In Tanzania, lion hunt packages retail at a minimum of US$75,000, and are estimated to have earned the Tanzanian economy US$75 million between 2008 and 2011. This sounds like a lot until set against the costs of maintaining 193,121 square kilometres of hunting land, which the lion biologist Craig Packer estimates to be US$600 million* per year. Set against the unsustainable decline in the area’s numbers of lion, it’s peanuts.**

‘The hunting sector,’ argues the IUCN report, ‘uses up a lot of space without generating corresponding socio-economic benefits.’ And adds: ‘Where management levels are similar’, so the ‘conservation results from big game hunting are lower than those of neighbouring national parks or reserves’, hunting areas being ‘less resistant to external pressures than national parks.’ Hunting, it concludes, does not ‘play a significant economic or social role, and does not at all contribute to good governance.’

We’re chasing the wrong money
The IUCN report (2009) does concede, however, that hunting ‘probably [has] an important role to play in stabilising the peripheral areas of conservation’, being self-financing and therefore ideally placed to fill vacuums created by a lack of funding. If viable wildlife conservation in Africa is enabled by buffer zones and essential migratory corridors, and the key to its ongoing success is the local community, then hunting, it argues, as a conservation management tool can and should be considered.

In which case, the socio-economic argument for hunting’s reintroduction in Botswana is far from made. While it’s true to say that ex-Controlled Hunting Areas have suffered the banning of hunting, it’s just as true to say that rural poverty in northern Botswana was not alleviated by hunting. According to a 2007 government poverty report, the majority of CBOs were ‘riddled with governance, financial and management deficiencies’, resulting in ‘substantial leakage and inequality in the distribution of income, especially in the wildlife CBOs’. Poverty rates for the north-west in 2010 were 30.1%, the highest in the country. Between 2011 and 2014, the combined revenue accrued by hunting CBOs had actually been in steady decline. ‘Until we sort out,’ says Mike Chase (Elephants Without Borders), ‘the comprehensive community benefits from wildlife hunting, where communities will enjoy the benefits of wildlife they co-existed with for years, I see no future in hunting on state land in this country.’

If true, we’re chasing the wrong money. The return on hunting’s nothing against a tourist industry that today accounts for a reported 12% of Botswana’s GDP, of which 75% is attributed to the pull of its wildlife. The big question here is not whether or not to lift the hunting ban, but rather why rural poverty in northern Botswana persists, especially given the region’s strategic importance vis-à-vis sustaining the economy’s second superstar.

The answer’s complicated. Overall, Botswana’s been successful in reducing rural poverty. However, it’s a success predicated on mineral (mainly diamond) exports, a model that has resulted in great benefits in (state-sponsored) education, health and infrastructure, but less so in job creation and as stimulus for a competitive homebred private sector. This is true across the economy, but especially so in the tourist sector, which has grown quickly, remains relatively unregulated, and operates a high-cost entrance bar – for operators and visitors alike.

The result is an enclave industry, one that’s over-reliant on developed countries for tourists, investment and services; that’s dominated by non-citizen owners; and that, considering its size and clout, remains a relatively poor employer in northern Botswana. Consequently, the link between tourist expenditure and the rest of the domestic economy’s weak, with a staggering 73% of its photographic safari revenue escaping abroad.

In short, the country’s second biggest industry is not the catalyst for northern Botswana sustainable development it claims to be. Lifting the hunting ban’s not going to change that, however popular the move.

Dave Waddell has worked with Wild Philanthropy and Journeys by Design for the past 10 years.

**3.6.19 – Contrary to the law, 66% of lion hunted in 2015 were 5 years and under, indicating an unsustainable decline in legal-to-hunt lion. More, quotas for hunted lion in Tanzania haven’t been achieved since 2007. To date, 110 of Tanzania’s 154 hunting blocks have closed, owing to unprofitable returns on the land. (For more, see aforementioned report) 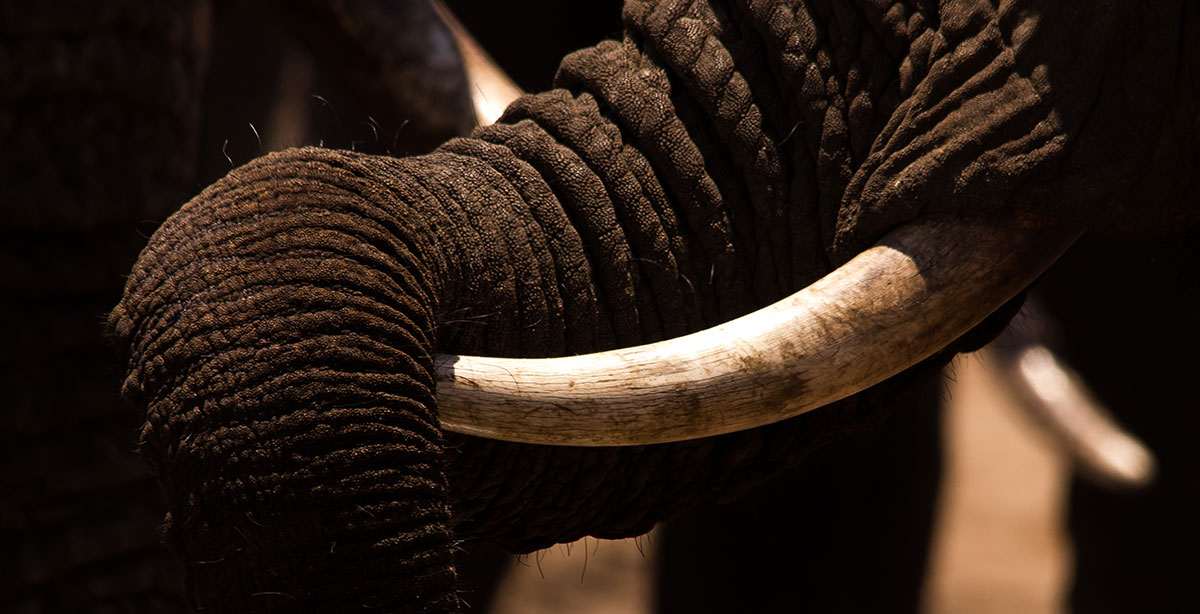